What a difference two and a half years makes! The top sketch was done this morning in about 45 minutes flat. Mostly because I misread my watch and thought that I had been sitting there for an hour longer than I had been. This was not a big leap for my poor brain to make since it was 9 degrees C with an apparent temperature of about 2 degrees with the wind taken into account. The next sketch was done in the opposite conditions – a midsummer scorcher. I remember sitting there for almost the full two hours labouring over the proportions and perspective. It was, I think, my second ever Urban Sketchers meet up. 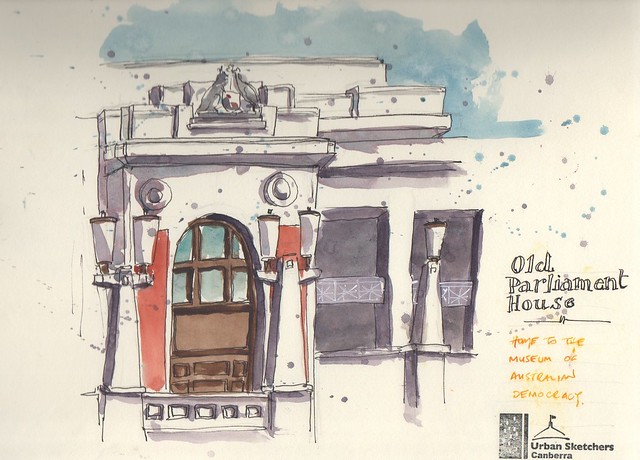 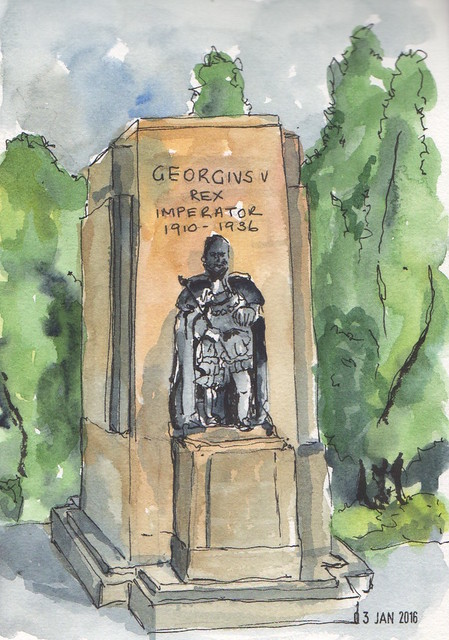 The two sketches are wildly different. I tried something different with today’s one, in that I focussed on a single part of the facade rather than trying to capture all of the rather long, low building. It is far looser and was completed quicker but the lines feel steadier even if the sketch is pretty wonky. I also left a lot of the page untouched with pigment.

The older sketch has far more tentative line work and I appear to have worked hard to cover the entire page with paint. It feels scratchy and wonky even though I was trying to be careful. The shadows are clumsy and I think I may have turned King George V into a little person. It is fascinating to be able to compare my growth as an urban sketcher using samples of my own work rather than looking at the giants in the field and winding up feeling defeated. I can see improvement in what I am producing, and that is encouraging.

At the end of the day I like both sketches, not just for the fact that I exited my hermitage to interact with other urban sketchers for a couple of hours, but for the life memories attached to them. Oddly I can remember what was happening in my life when I was trying to figure out how to render a bronze statue on a flat piece of paper. There’s something about drawing that sucks everything in and locks it into the image. I love it!