I have been lucky enough to have a weekend Â where I was free to get out and draw on location for a couple of hours each day. It’s such a lovely, relaxing way to pass the time and decompress after a busy week. Today’s outing was with my local Urban Sketchers group, and we ventured out to the Shannon’s Wheels car show. It was heaven! I was like a kid in a lolly shop…so many shiny things! I was hoping for an old Morgan to draw but couldn’t find one…so I set up shop by the Aston Martin club set up and drew this fabulous red Vantage. There was a DB9 there that I would have preferred to draw, but it was obscured by flags and such. I had an attack of nerves when I first sat down to draw. Being situated in the midst of a crowd was pretty confronting; I am almost always tucked away in a stairway or under a tree or something , but this time it was me and my stool in the middle of a carpark with people streaming past constantly. My hand shook ridiculously for the first half an hour or so. 😐 In the end I settled and even chatted to a couple of elderly gentlemen that stopped for a sticky beak. I am mostly pleased with how this turned out after two hours of faffing about…some of the proportions are a bit off, but not bad for a location sketch I think. 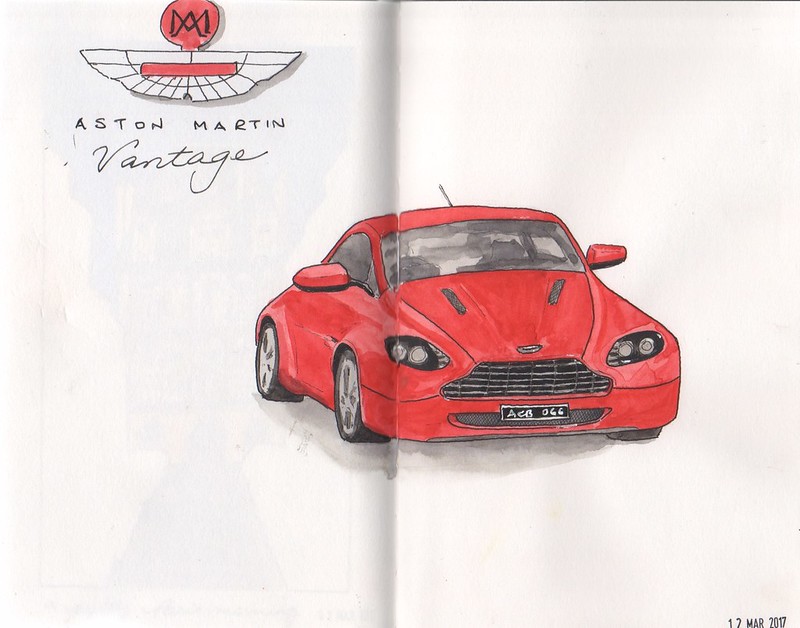 Yesterday’s adventure included a solo brunch excursion to the Five Senses Gourmet Bar so that I could draw something lovely and edible for this week’s Sketchbook Skool assignment. I spent a couple of hours drawing and painting and it felt like five minutes… I love it when that happens! My food was of course cold by the time I got to eat it, but it was still delicious. The other patrons were particularly chatty and curious, as were the staff. At one stage the chef was sent out to have a look. Most were aghast that my eggs were getting cold. I would like it noted that whilst this yummy brunch presented something called “turkey bacon” I opted for the salmon variantÂ since there is clearly no such thing as turkey bacon! Bacon can only come from piggies and this is the way it must remain! 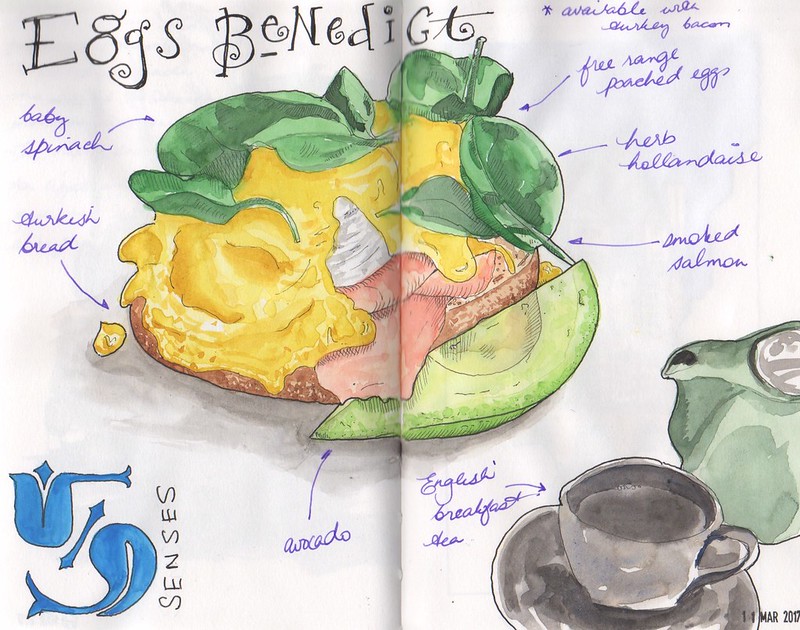 Drawing in public is always an adventure. I hopeÂ myÂ nerves settle as I do it more often. People are of course invariably lovely and say nice things, or tell me about how they used to draw, or how they can’t draw a straight line or a stick figure. And they aren’t there for more than a minute or two anyway. 🙂 As with anything…practice! It’s a long weekend here in Canberra, so I may yet get out for another adventure tomorrow. I hope you are having a wonderful weekend too.