It was a lovely crispy winter morning at the Ainslie shops with the Canberra Urban Sketchers mob today. Had the wind stayed away it would have been very pleasant, as it was the cold bit hard and I was grateful that I had had the forethought to include some handwarmers in my kit. It was particularly rough on our new members from Malaysia and those of our number who have recently returned from Europe’s heatwave conditions. Nonetheless we persisted and enjoyed warm company and had fun sketching.

The Ainslie shopping precinct is one of the few around the place that hasn’t had a large-scale facelift. It has retained it’s original facade and has been perked up with a whole zoo of public art. The snails in the photo below made me smile! Whilst we normally visit the larger “tourist” and institution type buildings to sketch, we decided that it would be nice to capture some of the older parts of town before they get swallowed up in the Lego-like modernisation program that seems to be sweeping the city.

I focussed in on the bright yellow signage of the laundrette, all the while being entertained by a couple of older fellows who started out chatting about the lottery, but then moved on to talk about animated movies featuring ants… in the end I heard snippets of Ant Bully, Antz and a Bugs Life. At one stage there where character voices and a scene being acted out. It was all highly amusing! The highlight of my morning however was a young kiddo walking though where a bunch of us were spread out sketching and he was quite amazed… “Mum! There are sketchers eeeeeeverywheeerrreee! Can I go look?” Love the wonder of little people. 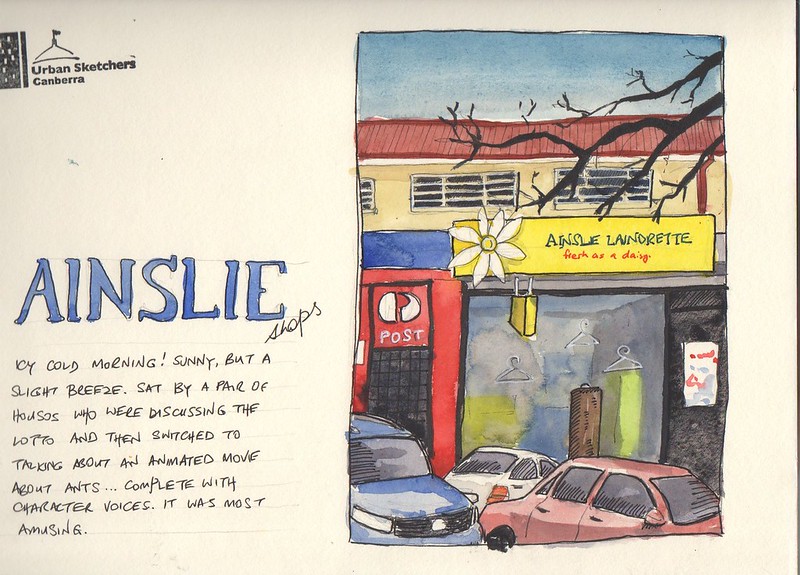 As always, click on the sketch to see a larger version.