The Auto Italia car (and motorbike) show was on in town this weekend and despite the crazy cold and drizzly weather, an intrepid few Canberra Urban Sketchers braved the weather and the crowds to see both the quirky and the flash cars on show. I love drawing cars! Had the weather been more pleasant I would probably have stayed on for a lot longer.

I fell in love with this little Fiat 600 Multipla from the moment I saw it. It almost looked like it was built backwards … funny shape it was! Definitely would not want to have a crash in one, there is absolutely nothing between driver and whatever one might hit. I had one gentleman tell me the story of his mother having one and driving from Belgium to Italy in it. It was apparently the perfect car for her and her twin babies since it was the only one that could fit a twin pram in the back at the time. There were lots of people interested in what I was doing and had several photos taken in action. I was also highly amused at the number of people that suggested that I should just take a photo, it would be far quicker. Ah yes, it would, but then I would not get to enjoy the details of the bug-eye headlights or the bumper that looks like warthog tusks as I drew them! One lady liked the sketch enough to want to buy it from me, so it won’t be staying in my sketchbook for long – it will be heading off to it’s new owner this week! 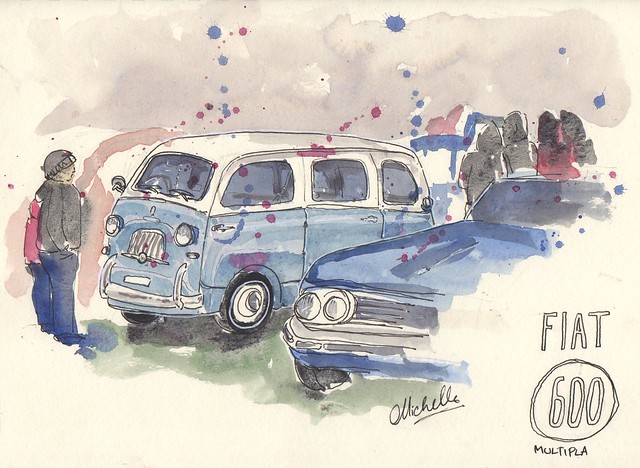 I had 20 minutes left after I finished the Fiat and started on a modern Alpha Romeo Gtv, but didn’t quite get it finished before the rain sent me running for cover. I’ll splash some colour on it during the week when I get a moment.

I finished off another sketchbook yesterday – it’s the little back one in this picture. Flip through video coming soon! I have been getting a little frustrated with the size of it of late, and annoyed with painting spreads and fighting with the gutter, so I am going to try the next size up and see how I get on. Despite being larger it is lighter than the black one because it has a soft cover. (They are both made by Stillman and Birn.) I am interested to see if the extra size is a help or a hindrance for everyday sketching.

I have followed Austin Kleon’s lead and added a picture of one of my heroines in the front to watch over me and keep me on track.

Next step is to draw my palette on the page that faces and get over the “new sketchbook” boogie man.